Want something  holiday-themed to read this December? Give my 100 page historical novella, “The White Hart” a looksee. Available on Nook and Kindle. Links below story excerpt.

excerpt from THE WHITE HART: a Winter Tale from the North Woods 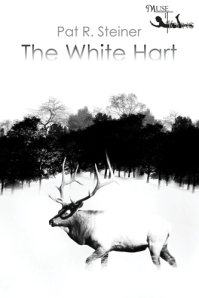 PA WAS A GOD FEARING MAN; rest his soul, although I never did see him enter church excepting for Easter Sunday service and on Christmas morn. He said people had their gods since there were people. In his opinion, this was well and good for them, but personally, he didn’t need no minister telling him how he ought to live. He knew right from wrong, and he believed with a rigid certainty it would be outright foolish for him to lay his immortal soul into the hands of a man who had never done an honest day’s work with those very same hands. He’d seen too much in his life to bet the farm, so-to-speak, on any one faith or denomination. “Kristoffer,” he’d say to me, “there’s just too much mystery in this world for any one religion to cover.” I agree.

He was a large man, my pa, literally, a giant among men. He was so tall and so broad in the shoulders when he entered a room he needed to duck his head and turn sideways just to keep from crack’n his egg or getting his self stuck between the doorjambs. Bred from strong stock he liked to say—a mixture of Scandinavian and Irish blood. He possessed many of the features you see on those who claim Viking heritage: the blond hair, the chiseled chin and sharp cheekbones, and those icy blue eyes. That’s what I remember most. Even after the illness stole away everything else, his eyes still shone—the bluest of blue skies on a frozen January day.

But you don’t want to hear about death. It is Christmastime, you say. The birth of the Savior, Christós, the Anointed One, and Santa Claus, that jolly old elf, Kris Kringle, bringing all them presents for the little tikes, eh? Merry Christmas and God bless us every one. Well, this is the story of a different Kris, although he pronounced it more like Kree-st, as in the frown lines you see between a woman’s eyebrows when you dunn live up to her expectations. This Kris was my pa, the man I’m named after. And though I’m no savior, except’n to those want’n a drink and a friendly ear, I suppose you could say I’m the baby Christ in the story because I show up near the end. Now if’n my birth was miraculous or not, I’ll leave that up for you to decide. Let me warn you ahead of time, too, there will be deaths in this here tale, because like it as not, as Pa used to tell me, “It’s not all of life to live.”

First though, you gotta hear how Pa met his best friend in life, Red Kearney.

Sometimes I wonder why Pa never named this here place The Red Fox instead of The White Hart, but you’ll see—everything fits together in the end. Not all neat and tidy and crystal clear like you read in them books and see on them movies and on the TV and such, but kinda messy instead, and not more than a little bit cloudy. But heck, that’s life fer ya, too, ain’t it?

The rest of this E-novella is available at: Amazon; Barnes & Noble;  Smashwords; or MuseItUp Bookstore